A Great Week to Talk about LOVE: Real Love, the One That Serves as a SPEAR and a SHIELD, not an EXCUSE 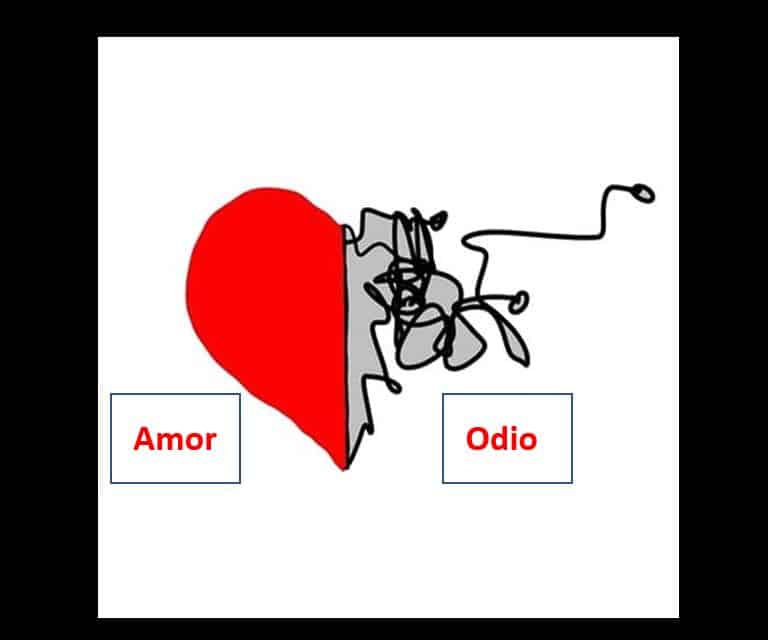 February is an ideal month for talking about LOVE and FRIENDSHIP. Fundamentally about the former —LOVE—, because in the environment in which we live, where the haters sharpen their teeth and nails more and more every day, it is logical to show love to one’s eternal opponent.

It is no problem to turn attention to LOVE, exalt it, feed it and make it grow, but let’s not ABSOLUTIZE it. It’s great to sit on the high horse of love and declare that “love conquers all“. And in the broadest sense perhaps it’s true. But in practice, in the day-to-day world of vested interests in which we live, in the midst of the pragmatism of survival that characterizes the class struggle (yes, the one that has not died off and is, these days, fiercer than ever), love is and has to be the foundation and sustenance, but it is not, by a long shot, the only tool, the instrument per se. We mustn’t bounce so much on the trampoline of illusions that we fall into the waters of ridicule swirling below.

That does not mean that we are rejecting the poet or the poetry. Of course, if we take it on without love, to quote Silvio Rodriguez, “it will all be in vain”. Of course, “Only love lights what lasts, Only love makes a miracle of mud… Only love engenders wonder, Only love can ignite what is dead”. It’s true. True, a hundred times over…, but let’s not forget that the same Silvio who gifted us such a hymn to love, also gifted us “The story of a being from another world“, whom he saw for the last time “amidst smoke and shrapnel”. And, do you remember how it went? “He was killing scoundrels, with his gun from the future”.

Does the second overwrite the first? Of course not, because the great Silvio, unlike some who manipulate his lyrics, understands perfectly well that love and hate are not two opposite poles, they are not exactly antonyms in everyday reality (and especially in the socio-political sphere). For that reason, he later confirms “I prefer that hate never take a seat, not for a second in the brilliance of the sun“, but without retracting the fact that one day (Song: Armed Struggle) “I walked on the side of another hate” and that dividing its “cry by colors”, “dying of living sitting in the distance”, he wanted “a shot and to dress as a human”.

There is no contradiction (except when we want to absolutize one of the parts of the equation) in the message of someone who gave us a song and made a speech about his right to speak, and instead of giving us one, he gave us thousands of songs, “with the same two hands that can be used to kill”.

It’s true a hundred times over … because if we are realistic, love and hate are two ways of expressing the feeling of attachment to something; taking a stand on something that matters to us, often more than our own lives. They are ways of reacting honestly and frankly to different life situations, especially in times of cholera, to paraphrase the great Gabriel García Márquez.

A serious academic study undertaken in 2017 at the Hebrew University of Jerusalem concluded that “some people may be happier when they feel the emotions they desire, even if those emotions are unpleasant, such as anger or hatred.” If we are honest, then, there is no denying that there are situations that require anger, recognition of anger, and a material expression of that anger in order to find a solution.

We American citizens are angry with Biden’s betrayals, with neoliberalism, with extreme inequality, with systemic racism, with the attempt to get us into a war with Russia or China, and a thousand other things. My fellow Cubans and I are angry at more than 60 years of a cruel, illegal and murderous blockade of our people. And in order to change things, we undoubtedly have to arm ourselves with love, heaps of LOVE, because we can only build anew on a foundation of love. Love is also needed to destroy the old ways, of course, but not love alone.

This was already understood, more than a century ago, by the Cuban National Hero, José Martí, a man of profound humanist beliefs, with an extraordinary capacity to love and to put that emotion above any type of hatred, but not as a substitute for it. That is why he left his legacy of that most essential stanza in the arsenal of any modern revolutionary:

“Love, mother, for the Homeland / Is not ridiculous love for the land, / Nor for the grass where our plants tread; / It is invincible hatred for those who oppress it, / Eternal wrath for those who attack it…”

Throughout history, Martí himself and many others have used love to move mountains, to make the impossible take a little less time, to build a better world, less unequal and unjust. That is the love that serves as a SHIELD against aggression, but also as a SPEAR against those who do not understand the reason or turn their need to annoy us into their main raison d’être.

And throughout that same history, love, kindness, and “virtue signalling” have also been used as an EXCUSE not to confront each other, not to seek problems, not to take positions, not to have to openly choose between Good and Evil, between God and the Devil.

Arantxa Alvaro Fariñas is still very close to the mark when she says that “the opposite of love is not hate, but fear“, although she reaffirms that hate is as negative as it is useless, to which we could add very useless, except when it serves as a weapon to overcome fears, to conquer and assert the realm of love. A great love for everyone, and not just for the elites or a few of their lackeys.

We can and we must banish hate from our hearts. And it is a laudable endeavor. But we cannot forget that haters exist, that most of them “never let go of nor do a U-turn on their hatred” unless we compel them with spears and fire.

We can and we must extend one hand offering an olive branch to the haters, without hiding the other hand that holds the club, ready to be used if required, and tossed aside when the hatred is gone.

We can and must build bridges on the basis of love between opposing factions, as long as the objective is not to stay in the middle but to ensure good wins out. Unless we have doubts about what exactly is “good”, or the best of both worlds.

We can and we must relate to those who think differently as our friends or brothers and sisters, but without sharing our mother and father, nor soul, nor principles with those who openly support evil, promote war, encourage inequality, call for invasions and demand more hunger for their people. At least, in my specific case, which also implies respect for what you think if it is different from me, those people are not and never will be my brothers. They do not and never will receive my love.

Finally, let’s be in no doubt that the cement and steel used in the construction of brotherhoods and bridges is LOVE, but the support beams need to be made of DIGNITY, and the tension cables of PRINCIPLES, those irreplaceable values that sustain true UNITY (so necessary in today’s world) and sincere FRIENDSHIP (as necessary as ever).

In the words of José Martí, later quoted by Che Guevara, “Now is the time of the furnaces, and only light should be seen”, that flame that feeds the fire must be nourished fundamentally by LOVE and KINDNESS, but also, when nothing else works, by the unending hatred toward those who oppress us and by the eternal condemnation of those who attack us.

Please, check also the second part of this article: