They Persuaded Me! I Accuse Putin of… Here’s the Full List. Enjoy! 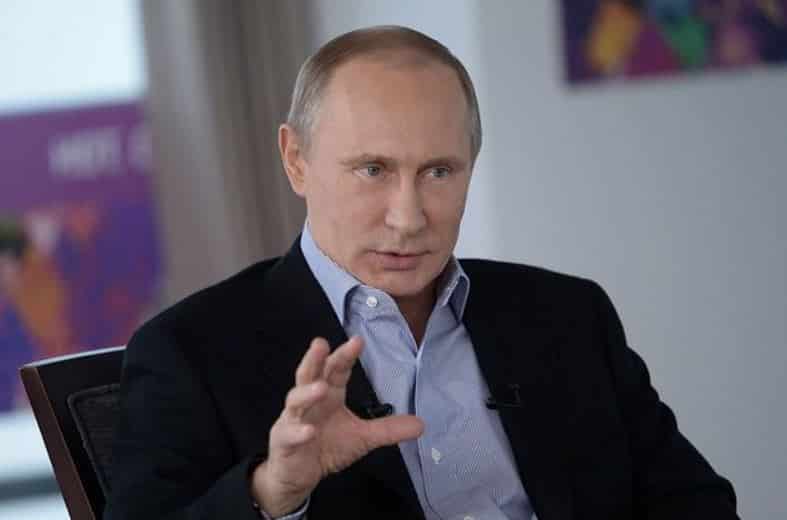 The West’s propaganda machine has worked this time like never before. Of course, they had a lot of time to prepare, they have learned a lot after so many attempts and there is a lot of money at stake, so they have run the extra mile to make millions of trained parrots repeat whatever they want: Putin is a murderous dictator who invaded poor Ukraine which is now being supported (to the extent that it suits them, of course), by the also very “poor” NATO members led by the United States (my current country of residence, to whose people, not their corrupt leaders, I swore allegiance with my life).

I have been one of the few people in this country (including Democrats and other Progressive associates) who have raised their voices to spread the real causes of the Ukraine/Russia/USA/NATO conflict. I have never “defended” Putin (he is perhaps too far away, and I lack evidence), I have never stopped affirming that I am against war, against ALL wars and I am for the peaceful resolution of conflicts. ALL conflicts.

However, I demanded, asked, and begged readers, followers, and associates not to get carried away by the information circulated by the media sold to shady interests, but to try to check out different points of view, to look in recent history and beyond, so as to understand what is really at play here.

I didn’t manage it. Many of my democrats and progressive friends continue to repeat and amplify the official version. Many have written to me, commenting on “the damage” that my opinion is doing, due to the number of people my articles usually reach… Well, they PERSUADED ME and below I am going to bravely face Vladimir Putin head-on.

I ACCUSE PUTIN OF having invaded Iraq in 2003, based on the subsequently proven lie that that nation was developing weapons of mass destruction that endangered world peace. I accuse him of having fabricated the evidence to assassinate not only Hussein’s soldiers, but thousands of civilians and of staying put there for years without a progress plan for that country, which he left totally devastated. («Hey, hey, sir, that wasn’t Putin, it was George W. Bush»).

I ACCUSE PUTIN OF having invaded Afghanistan under the pretext of fighting the Taliban, of having destroyed that country to an incredible extent during an almost 20-year occupation, which “proudly” claimed the lives of thousands of civilian victims, including women, the elderly, and children. And then withdrawing, leaving the country in ruins and in the hands of the same Taliban that back in the day it said it was fighting. («Pssst, listen, sir, but what have you been smoking today? It was not Putin who did that. The war, invasion, and occupation of Afghanistan were started by Bush Jr., continued by Obama and Trump, and ended by Biden, with a troops withdrawal which was only slightly less painful than the horrible situation in which those poor people have been left»).

I ACCUSE PUTIN OF having supported Saudi Arabia’s criminal military operations in Yemen, which have already claimed tens of thousands of victims, and that although last February 4 he said that his country will not continue to provide that support (which is still no more than words), he reaffirmed that his government “will continue to defend Saudi Arabia”, a country where human rights are violated daily and on a mass scale, and where even the American-based journalist Jamal Khashoggi was dismembered. (-«Eh, sir, but how far are you planning on going? That has nothing to do with Putin, but with the last American presidents of both parties and the guy in the meeting on February 4 was Joe, not Vladimir… are you some kind of idiot?!»-).

I ACCUSE PUTIN OF having orchestrated the brutal and bloody 2014 coup d’état in Ukraine (the reality of which was revealed by a French journalist in a moving documentary entitled “Ukraine: The Masks of the Revolution“), which led to the removal of the legitimately elected president Viktor Yanukovych and after acknowledging that Yanukovych escaped “after we agreed to mediate in the power switch“. («But have you ever heard such nonsense? You know nothing about anything! The Maidan demonstrations were planned by the CIA and backed by the US government of the day. And the one who acknowledged it was not Putin, but Barack Obama in an interview with CNN in February 2015″). 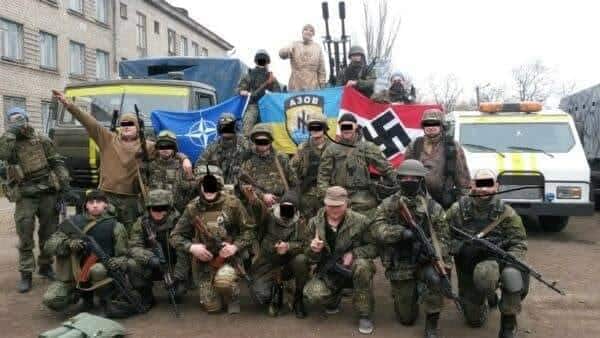 Ukrainian fascists in the Ukrainian army have provoked terror in Donbas.

I ACCUSE PUTIN OF maintaining a criminal blockade against my country of origin and forever Homeland, Cuba, for 62 years already, causing hardship for 11 million Cubans whose only sin is being, in the majority, unwilling to sell their sovereignty, and not kowtow to their powerful neighbor to the North. I accuse him of imposing 243 cowardly additional sanctions in the midst of the pandemic aimed at choking the life out of my beautiful people with hunger and a lack of medicine. And I accuse him of still maintaining all those measures, breaking his campaign promises, and licking the ass of those who walk around Miami with posters that make a clown of him. («OK, OK, so now you’ve gone completely batshit crazy. The blockade on Cuba has nothing to do with Putin, but with the last 13 US Presidents. The guy with the 243 measures was the vile and corrupt Trump and the one who has kept them in place, licking the boots of the Cuban «contras» who didn’t vote for him and never will, is Joe Biden, not Vladimir Putin… and let’s see if you shut up now because I can’t stand any more of your stupid ignorance»).

Well, I’ll finish up, but not before making sure you know that I ACCUSE PUTIN OF having instigated hatred against the Russian population in Ukraine, the majority in some regions such as Donetsk and Lugansk, and of having backed the Ukrainian fascist gangs (which in recent years have been reborn and multiplied like a plague) in murdering thousands of innocent people, including children, in those regions, removing pensions and anti-pandemic assistance, and promoting hatred towards the Russian populations, while bending over backward for his American master. I accuse Putin of that, obviously. («Look, Mr. Tejeda, Dr. Tejeda, or whatever the heck people call you, the star of the show and the one who is guilty of everything you say is the current Government of Ukraine, on the advice and encouragement of its masters in the US and NATO… the least you could do is study a little before talking so much BS… and now you got me pissed»).

Brief Acknowledgement of my Ignorance

I wanted to keep going. In no particular chronological order, I wanted to ACCUSE PUTIN OF the Vietnam War and the tens of thousands killed by shrapnel and napalm. I wanted to blame him because in the United States, the richest country in the world, we will soon reach one million deaths from a pandemic that could have been controlled with greater respect for the humanity (and not party preferences) of our citizens… Of having invaded Cyprus and having split it in two to this day with Europe turning a blind eye, but surely that pedantic gentleman who has been correcting what I have been saying is going to tell me that the United States is the only culprit of the former and the latter is nothing to do with Russia, but with Turkey.

I wanted to accuse him of having massacred more than 130,000 people in Yugoslavia, but the same old punk will correct me and says it was NATO. I wanted to settle the score with that scumbag, Putin, for the hundreds of thousands of children who die of malnutrition and the millions of adults who die of hunger (without anyone pulling their hair out as some are now doing over Ukraine), while the rich get richer amid the rampant and insatiable corporate greed of those who have more… I wanted to blame him for hundreds, thousands of other things…

… But that miserable sod who has been pulling me up on everything I say since the outset is not going to leave me alone and he is going to cover up all of my ramblings with his irrefutable facts and arguments.

So, I better shut up, but not before begging you to not to do the same as me, don’t let yourself get carried along, as I did, by what the corrupt disinformation media, at the service of those who rule the world, say. Don’t take as truth what’s said by someone who once had the reputation of objectivity, until they were crushed by the fortunes of the Gods of the dollarized Olympus. Study, seek the TRUTH, compare facts and points of view, and do not make a fool of yourself in the way I have done in this article.

I came to ACCUSE Vladimir Vladimirovich Putin and it seems that they have gagged me. With a few knocks. Fortunately, I stopped in time.

ESPAÑOL By now, the images of the oil explosion that erupted in the Cuban province of Matanzas...
Leer Más...

For Biden’s Summit of the Americas, Obama’s Handshake With Raúl Castro Shows the Way

Most Relevant Aspects of the Speech in Havana by the President of Mexico, Andrés Manuel López Obrador

On May 8, 2022, the President of the United Mexican States, Andrés Manuel López Obrador...
Leer Más...

The highly regarded American philosopher and linguist, Noam Chomsky, in a July 29, 2015 article in the...
Leer Más...

Will Putin Put Military Bases in Mexico, Cuba, Venezuela and Nicaragua? Let’s Look at the Facts

We are going to take a look at one of the most complex conflicts of our time (from the point of view of...
Leer Más...

Read this article IN SPANISH - EN ESPAÑOL As a result of the article published yesterday, “A Great Week to Talk about...
Leer Más...

A Great Week to Talk about LOVE: Real Love, the One That Serves as a SPEAR and a SHIELD, not an EXCUSE

February is an ideal month for talking about LOVE and FRIENDSHIP. Fundamentally about the former —LOVE—, because in...
Leer Más...

Human Rights Centered on People, a Necessary Framework to Counter the Dangers of Neoliberalism

Two centuries ago, a former European colony decided to catch up with Europe. It succeeded so well that the United...
Leer Más...