Will Putin Put Military Bases in Mexico, Cuba, Venezuela and Nicaragua? Let’s Look at the Facts 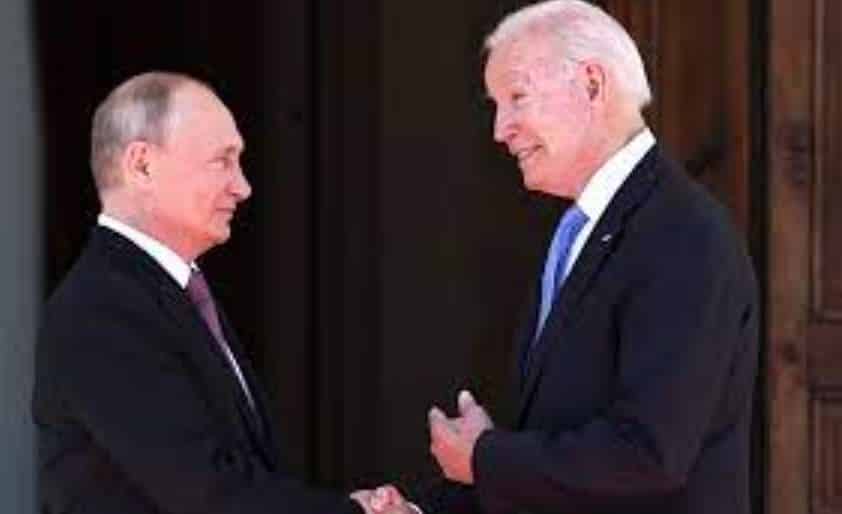 We are going to take a look at one of the most complex conflicts of our time (from the point of view of the economic interests involved, history, etc.) in the simplest way we can find to be able to identify where we are in a few paragraphs.

The United States has a military budget nearly 13 times that of Russia. And if we add US expenditure to the NATO countries’ military budget, they would exceed Russian military spending by more than 20 times. Even so, we continue to sublimate the “danger” that Russia represents for the US and its allies. While 778 billion of US taxpayer dollars are spent on war, China’s budget is 252 billion, India’s 72.9 billion, and Russia’s 61.7 billion.

Furthermore, Russia does not have any military bases near the United States. On the other hand, if we look at the map below, the US and NATO have surrounded a good part of Russia with military bases. And all that’s missing is the “master thrust“: that of including Ukraine in NATO and killing two birds with one stone: locate a military base in one of the strategic points that are not currently covered and, at the same time, limit the arrival of Russian gas to Germany and much of Europe. 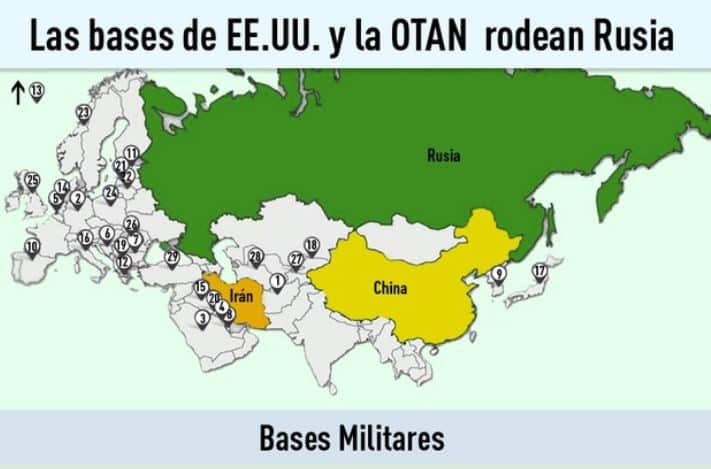 Now, what would happen if Putin were negotiating with the legitimate governments of Mexico, Nicaragua, Cuba and Venezuela to establish Russian military bases in each of those countries? Would they have the right to do so? Well, if we’re honest, of course, they would. They are sovereign countries and they are backed by legitimacy and the law. But can you imagine the uproar from Biden, from the US Congress, including Republicans and Democrats? Can you imagine the terrible scandal whipped up in the media?

But the point is that Putin is not planning to set up any military bases in those countries, nor are those countries offering him their territory. Should they? It’s possible. If the US and NATO can put bases close to Russia’s borders, why can’t it be the other way around? However, this is not the case…

Instead, all Putin demanded was a serious commitment that Ukraine would not be accepted as a member of NATO. Ahhhhh, but the hawks of war in our bellowed US could not accept that because then how would they justify the sale of weapons to Ukraine that brings such juicy dividends and how would they justify the increase in the military budget that they are already forecasting for 2023? And how they would justify substituting Russian gas for the same gas that today is obtained by US fossil fuel companies and especially fracking companies.

They are simply not telling us the TRUTH. Neither in terms of the true causes of the conflict nor the interests involved. Nor are they telling the truth regarding the participation of the United States in removing the government which was legitimately elected by the Ukrainians and its replacement by a puppet regime of American interests, nor are we getting the truth about the real cause behind the Donetsk and Lugansk regions separating from Ukraine…

Anyway, we promised to keep it brief and we will. Below you will find some links that may enlighten you much more about the reality of the Ukraine-Russia-United States conflict. We hope that these few paragraphs make you reflect, question what you hear in the media, and seek reliable and objective information that makes us all wiser.

ESPAÑOLAs is widely known, Cuban diplomats at the United Nations are limited in their movements to the...
Leer Más...

The Man Who Helped Destroy the Soviet Union Died: He Played With the Tiger and Ended Up Swallowed

LEER EN ESPAÑOL Editor's Note: The article below was published by Walden Bello in...
Leer Más...

ESPAÑOL By now, the images of the oil explosion that erupted in the Cuban province of Matanzas...
Leer Más...

For Biden’s Summit of the Americas, Obama’s Handshake With Raúl Castro Shows the Way

Most Relevant Aspects of the Speech in Havana by the President of Mexico, Andrés Manuel López Obrador

On May 8, 2022, the President of the United Mexican States, Andrés Manuel López Obrador...
Leer Más...

The highly regarded American philosopher and linguist, Noam Chomsky, in a July 29, 2015 article in the...
Leer Más...

They Persuaded Me! I Accuse Putin of… Here’s the Full List. Enjoy!

Read this article IN SPANISH - EN ESPAÑOL As a result of the article published yesterday, “A Great Week to Talk about...
Leer Más...